This story appeared on February 28, 2015 in the Gardner News. Eryn Dion contributed to the report. 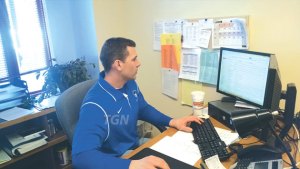 When Murdock Principal Joshua Romano answered his phone in Barnes & Noble, he didn’t know he was setting in motion a chain of events that would place himself, and Murdock High School, on the national stage.

The caller — the father of a student — was asking what Mr. Romano was going to do about two Twitter accounts attacking Murdock students. Hanging up the phone, Mr. Romano was furious.

His inbox was flooded with messages from parents, teachers, even students, interrupting their February break to report inappropriate tweets implying sexual promiscuity as well as criticizing the athletic ability, appearance and sexual orientation of classmates.

“Fifty kids were following these accounts, retweeting, favoriting it, it was spreading,” he said. “I wanted to snap down on it right away. … What if the kids started thinking these accounts were cool, and then I had a dozen?”

So he went on the offensive, first on Twitter, calling the accounts “largely vile and ignorant,” and then in an email to the student body.

“To the pathetic cowards who chose to start and participate in this, you are warned I am coming for you and I am furious,” he wrote.

A veteran of the Iraq War, Mr. Romano said, “I have more respect for insurgents I fought in Iraq than I do for the people behind this Twitter account.

At least Iraqis had the courage to face their targets and not hide.”

When overseas, Mr. Romano served in a unit that lost a member to an insurgent. After that, he said, every time they went out they wondered if they would be the next one in a body bag. Those Twitter posts provoked the same type of fear, he said.

“Everyone was worried they were going to be the next person,” Mr. Romano said.

While he later said he should have calmed down before sending the email, to him, the accounts — @confessions2k15 and @murdockhigh2k15 — had the potential to be just as deadly as the insurgents.

He remembered the story of Phoebe Prince, the 15-year-old from South Hadley who hanged herself in January 2010 because of bullying.

“That’s what I was thinking about. I don’t want a kid to do something terrible,” Mr. Romano said. “If I have to make a mistake, I would rather be too harsh.”

How to combat cyberbullying is an issue that administrators around the country are battling as it becomes increasingly prevalent.

Both Gardner and Narragansett grappled with similar incidents over February break — although neither as serious as the one sweeping through Murdock. While all the accounts have since been terminated, administrators say it’s only a matter of time before a new, more-determined set crops up.

One of the main drivers behind cyberbullying appears to be the idea of anonymity. Perpetrators hiding behind fake photos or names believe they are shielded from any consequences — that there are no real-life repercussions because these crimes occur in the virtual world.

But as cyber crime has evolved, law enforcement has evolved with it, and where similar cases may have fallen apart in court during the advent of social media, there are now numerous charges the District Attorney’s Office can level at suspects. These charges range from simple harassment to intimidation of a witness, assault and battery, and even the more-serious assault with a dangerous weapon charge.

“If you’re caught, we have state police experts who can retrieve that,” said Tim Connolly, director of communications for the Worcester County District Attorney’s Office.

Many of the cyberbullying cases brought to trial deal with juveniles, Mr. Connolly said, which is why the DA’s office reaches out to students through seminars and presentations in middle schools and high schools across the county.

“We’re talking to kids in school virtually every day,” he said. “Thousands of students in Central Massachusetts have seen our presentations.”

The DA office’s cyberbullying courses are the most requested offerings, Mr. Connolly said — a sign that school districts are taking the threat of online harassment very seriously.

Narragansett has taken advantage of the DA’s presentations — and additional staff training — for several years, high school Principal Shawn Rickan said. The programs help his school “strike a balance” between student education, counseling and law enforcement when approaching the issue of cyberbullying.

“I’m hoping that we have a handle on it,” he said.

One of the main ways the DA and schools combat bullying, in both the real world and virtual world, is by building empathy between students, allowing them to see their victims not just as names or faces, but actual people.

“If you wouldn’t want to have someone say things like that to your brother or sister, don’t say it about someone else,” Mr. Connolly said.

“Many times we hear from students caught in the early stages of bullying who say they thought it was going to be funny,” Mr. Connolly commented.“Oftentimes, it goes beyond funny really quickly.”

In the case of Murdock, the accounts went so far beyond funny the incident was featured Friday morning on “Good Morning America.”

“It shocks me this is a nationwide story: ‘Principal takes strong stance on bullying.’ This shouldn’t be news,” said Mr. Romano, who’s ready for the incident to settle down.

“Everyone should be taking a strong stance on bullying.” Mr. Romano said he’s received an outpouring of support from the community and from victims of bullying across the country, who have emailed him with their stories.

He’s also been supported by Superintendent Salah Khelfaoui, who said softer wording may have been nice but that he understands Mr. Romano’s position.

“He’s a champion of the kids and has no problem fighting for them,” Dr. Khelfaoui said. “He doesn’t tolerate anything that would jeopardize their safety.”

Inside the high school, things are starting to return to normal.

The kids who were victims of the Twitter accounts have said they feel well supported. As for who did it, that’s a question likely to go unanswered.

Law enforcement says Twitter is unlikely to release the names, and with all the publicity, Mr. Romano doubts anyone will confess. About a dozen students have been accused by their peers, but there is no proof to accompany the accusations.

Mr. Romano said he doesn’t want a witch hunt on his hands.

“I don’t want two kids who are angry at the world to be what drives this school,” he said.

Instead, he’s told students who see this sort of behavior online to report it directly to the websites and to him.

From there, he said to continue to focus on the positives.

“They’re better than this,” he said. “This is not what I want for our school.”